In the Wolf’s Den with Wolfie

The four year collaboration between Gladstone Brookes and the Wolves Charitable Foundation continues to go from strength to strength.

The scheme began when the firm sponsored the creation of the Wolf’s Den computer facility at the Halliwell Jones Stadium in November 2011.  The new facility was designed to offer a variety of educational opportunities to the people of Warrington and is the flagship of The Children’s University.

For the next three years the Wolf’s Den welcomed schoolchildren from all over Warrington to a series of themed activities which included the London 2012 Olympics, The Rugby League World Cup and Disability Awareness.

Last year the GB staff took the skills they had learned in the Wolf’s Den out into the community, helping the Foundation to promote disability awareness to schools throughout the town.

Weekly Friday afternoon sessions have included normal PE style lessons, but there have been other lessons too like a mixed yoga/street dance lesson and a trip to the Halliwell Jones stadium, the home of Warrington Wolves.

Coaches from the local Hook & Jab Boxing Club visited the school and treated the class to a lesson with a difference.  Pupils were taken through circuit training and sparring sessions by Great Britain boxing performance coach Amanda Groarke and her husband Derek with boxer and coach Danny Craven. 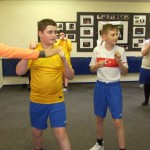 Amanda teaches how to punch 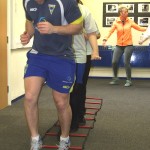 Anthony Rimmer helps one of the pupils get gloved up 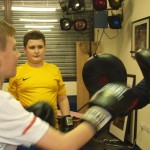 How to throw punches 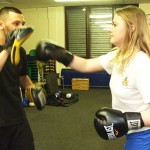 The girls joined in too 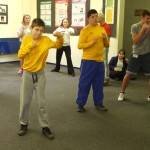 The class practices a drill

Said Amanda: “It was a great session with the kids all getting involved.  They seemed to love it.  They also got the chance to talk to Danny about how his diet and training helps him prepare for fights.”

Craig Thomason from the Foundation said: “It was great to have Amanda, Derek and Danny involved.  It gave the kids some insight into what it’s like work towards the levels of health and fitness boxers need to have.”

Amanda Hunt, the special educational needs co-ordinator for St Gregory’s, added: “The boxing session was fantastic. I have great respect for Amanda and Derek and think they pitched everything at the right level.  There was high energy for the duration of the session.

Comments from the children included:

To bring variety to the sessions Craig has organised a number of trips out for the pupils.  The first was to the Halliwell Jones stadium with a behind the scenes tour to show the children where their local rugby heroes played.

This was followed by a trip to the Wolves training facility at the University of Chester’s Warrington campus where they met first team players Ben Currie and George and Toby King.  Their guide for the tour was Player Performance Manager, Phil Jones. 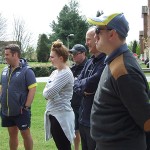 The GB team wait for the start with Phil Jones (left) 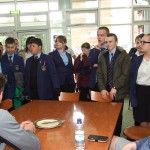 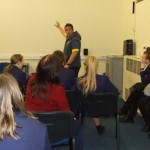 Phil Jones explains how the video facility is used in training 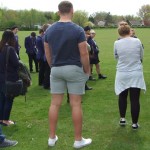 Inside the new training barn Caleb received his free tickets from Ben, Toby and George

Said Craig: “We were lucky enough to receive an extensive guided tour of the Wolves training facilities including the newly opened ‘Training Barn’. The tour gave the pupils a fantastic insight into how the players not only spend their day to day, but what/where they eat as well as the state of the art technology that is used to improve performance.

“I think it was a real eye-opener for the pupils who are only used to seeing the players perform on a match day and I think many were shocked at the level of preparation the club goes into to ensure the team is given the best possible chance on the pitch. Phil, Ben, George and Toby were able to give first hand information about what they like (and do not like!) doing at training.”

Amanda Hunt is in no doubt about the benefit the project is having on the pupils.  She said: “I can see first hand the difference in confidence of the pupils and the willingness and determination to have a go and join in.  Before this they were spending more or less 24/7 in the base room at school.  I am hopeful that this is the start of a more inclusive approach to our designated provision. “The parents and pupils on a weekly basis talk about the activities and new experiences which the children are having the opportunity to be part of.  In any meeting with a parent or discussion with one of the pupils the thing they look forward to most each week is Mr T (Craig Thomason) and the team coming in.

“The pupils are also developing their social & communication skills which they find particularly difficult from building relationships with the coaches etc and meeting new people.  I can’t thank you all enough for your support and the developing partnership.”

Craig commented: “The project with St Greg’s continues going from strength to strength, with the fantastic pupils at the school being aided by dedicated, enthusiastic volunteers from Gladstone Brookes as well as involvement from the club and players.

A particular highlight of the training barn visit was presenting an extremely happy pupil with the Gladstone Brookes family season ticket for the weekend’s game against Widnes – a chance to see his first live Warrington game.”

Gladstone Brookes staff love getting involved in the project.

Stu Farley was one of the supporters on the training barn trip and said: “Our visit to the Wolves training centre saw the coaches and players answering all sorts of questions from rugby to food and the kids got the chance to see how the players train in between games and the superb facilities they have access to.

“The kids’ reactions clearly showed how much they enjoyed the trip and meeting the players, leaving them with fabulous memories I am sure they are still talking about. A huge thanks should go to the Wolves coaches and players for giving their time to show the kids around.”

Chloe Humphries was at the same event.  She commented: “The day was enjoyable for all.  It was great to see the children interacting with the Wolves players and seeing where they train and spend most of their time.”

Leon Moye, general manager of Gladstone Brookes, summed up the firm’s involvement by saying: “The continuing success of this project is a source of great pride to our company. We believe in giving back to the community in which we live and work and the current scheme with St Gregory’s has continued to build in the great relationship we have developed with the Warrington Wolves Charitable Foundation over the last couple of years.

“Our staff thoroughly enjoy getting involved and it’s obvious that the children love the events as Amanda’s comments and the thank you card show.”