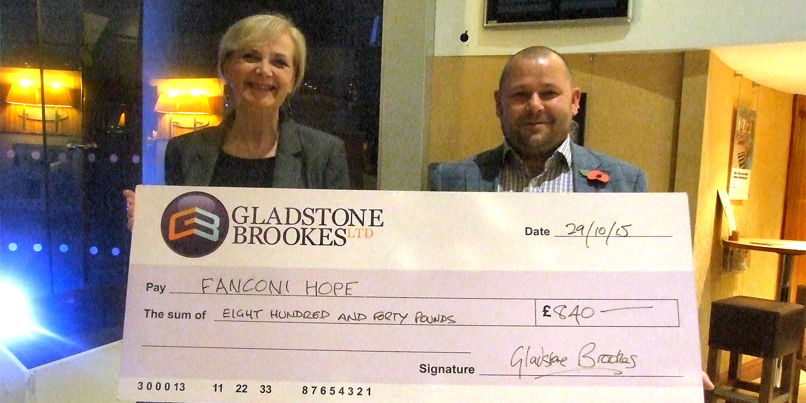 Many people will not have heard of this month’s Gladstone Brookes nominated charity, but Fanconi Hope is desperately trying to raise funds for research into a rare, life-limiting genetic disorder in children known as Fanconi anaemia.

While the disease itself doesn’t kill, it causes a pre-disposition to head and neck cancers for which there is currently no cure.

The charity was nominated by Jason Moore whose cousin’s young daughter, Hannah, is suffering from the disease.  He said: “A young relative of mine suffers from Fanconi Anaemia which is why I nominated Fanconi Hope as this month’s charity.

“As it is quite a rare condition, very few people are aware of it, but hopefully with the donation from our staff, that awareness can be spread just a little further so that sufferers of this condition are able to face the future with more confidence.

Hannah’s mother, Sasha, thanked Gladstone Brookes for our £840 donation, saying: “At the moment there is no cure for Fanconi Anaemia.  There’s improved treatment for the bone marrow failure with more successful bone marrow transplants, but there’s no long term cure.

“Overall the condition is pre-cancerous which means Hannah has a genetic disposition to cancer as her DNA doesn’t repair itself very successfully.  Her life expectancy is shorter and she will eventually get difficult to treat cancers of the head, or neck.

“The research focuses on issues like gene therapy, how DNA repair has a role in cancer development and vaccinations to prevent or limit risks. It really affects the bigger issue of cancer research. We just need someone famous or a big drug company to pick up on that fact.”

Charity co-founder and secretary Robert Dalgleish said: “We would like to thank Gladstone Brookes for this very generous donation which will help towards the funding of our research nurse/co-ordinator who is working with the research team at Manchester University.

“The team is part of an international effort, working in partnership with the Fanconi Anaemia Research Fund based in Eugene, Oregon.  As well as the research effort, we provide support through information and guidance for families and individuals affected by the disease.  The charity is run by parents of affected children in their own time.

“We are currently fundraising for further research work, particularly the three year Manchester University study.  Generous donations such as yours are always needed to keep things on track,” he added.