﻿ Gladstone Brookes | CHARITY OF THE MONTH – Help for Heroes 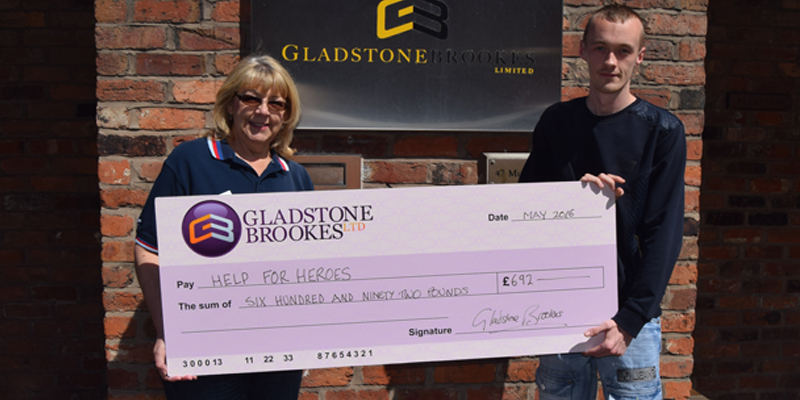 Charity of the month for May was Help for Heroes and it’s a very special one for its nominee, Jak Millington.

For Jak is an ex-soldier with personal experience of what Help for Heroes does for our service personnel.

Jak served with the Royal Dragoon Guards between 2008 and 2011 when he was badly injured in a road accident and hospitalised for nine months.

Said Jak: “I was lying there in a hospital bed when someone from Help for Heroes came along and offered to help in whatever way they could.  Until then I thought they only helped out the wounded guys, but they did a great job for me.  This was my way of giving something back.”

Receiving the cheque on behalf of the charity was June Ross, who said: “Once again, may I express my thanks to the staff at Gladstone Brookes and to Jak Millington for kindly nominating Help for Heroes to receive this wonderful sum of £692.

“At Help for Heroes our mission is to deliver an enduring national network of support for our wounded and their families through our network of Recovery Centres.

“The war in Afghanistan may be over, but for those who have suffered life-changing injuries, their battles are just beginning.

“We’ve estimated that, of the 220,560 individuals deployed to Afghanistan and Iraq between 2001 and 2014, up to 75,000 servicemen and women (and their families) may need our support in the future. We will not let them fight these battles alone.

“The generous donation from Gladstone Brookes will help us to offer that support, and to inspire and enable those who have made sacrifices on our behalf to achieve their full potential.

“But it’s important to remember that, as Jak discovered, we don’t just help wounded service personnel.  People can need help in other ways, not just our wounded but also our injured and sick personnel.  Our aim is to be there for everybody and help them in whatever way we can,” she added.

This is the second year in a row we have helped the charity.

They were nominated last year by Michelle Macchione who presented  them with a cheque for £801.