﻿ Gladstone Brookes | CHARITY OF THE MONTH - A summer of giving

2016 has been a summer of giving for the staff of Gladstone Brookes with three widely differing charities receiving a donation from the Dress-down Fund.

First to benefit was the TLC appeal – Teddies for Loving Care – which puts teddy bears into accident and emergency units throughout Cheshire to help traumatised children come to terms with what’s happened to them. 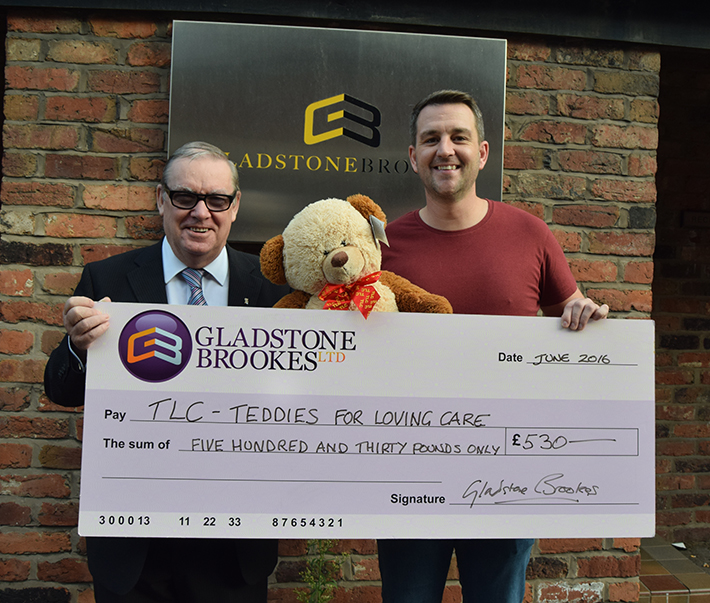 It was nominated by Emma Wheat, whose granddad is one of the charity organisers.  She said: “The teddies are there to help alleviate the stress and fear these children are feeling when they arrive in A&E.  They take them with them on their journey and get to take them home after.”

Receiving the cheque for £530, Joe McInnes said: “Thank you Gladstone Brookes for this tremendous donation and to granddaughter Emma for nominating us. We really appreciate it.

Our fund raising target for the year is £20,000 and this is a big help for the scheme which has put 120,000 bears into Cheshire hospitals over the past few years.  Thank you to the Gladstone Brookes staff for their generosity,” he added.

Warrington Disability Partnership (WDP) received a cheque for £620 from the Dress-down Fund which will be used to purchase a new mobility scooter for the charity’s Shopmobility scheme in the Golden Square shopping mall – a service is regularly used by more than 300 people with serious disabilities to shop independently.

The Partnership is a local charity which has been supporting disabled people and those with long term health conditions for 25 years. 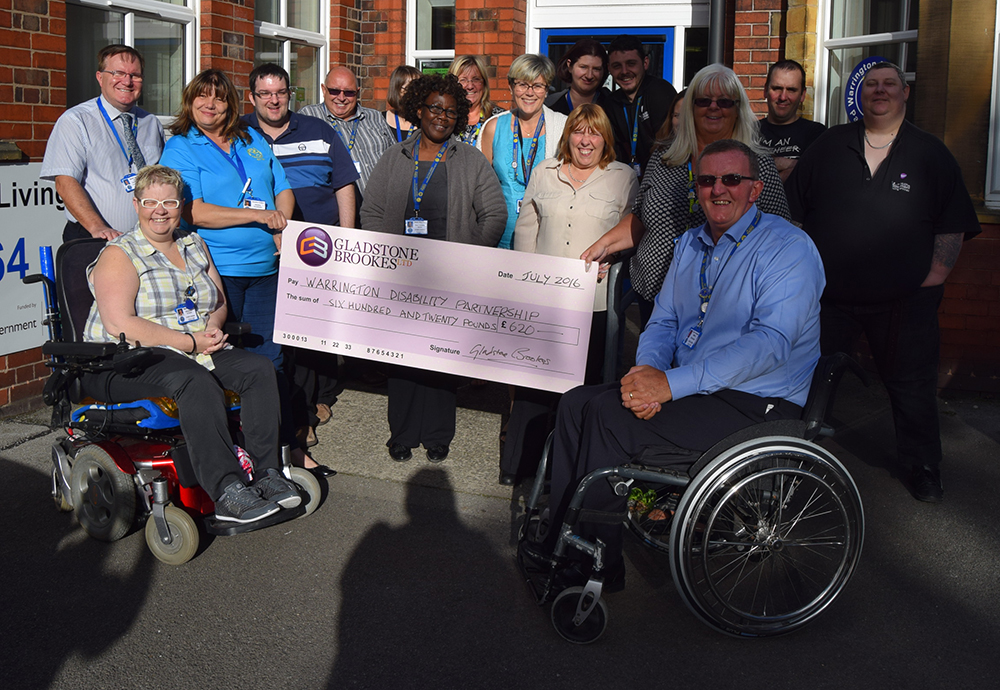 Chief executive Dave Thompson said: “We really thank the team at Gladstone Brookes for their continued support for our charity.

“It’s the third year of our working together and long may it continue.

The Stroke Association was the third charity to benefit, with a cheque for £458.

Gladstone Brookes general manager Leon Moye said: “This is a charity very close to home because one of my best friends recently had a stroke at just 32 years of age. It’s shocking when someone so young can suffer a stroke.  You usually associate it with older people.

“We give to a wide range of charities throughout the year.  This one had already been chosen, but suddenly it became more personal.”

Greg King is Leon’s friend who suffered the stroke.  He said: “We wanted to do something that wasn’t too demanding for sponsorship as I wasn’t up to a 10k run just yet!  We were hoping that in doing so we would raise awareness of strokes in younger people as we have been told by a number of stroke consultants that they were becoming more common at a younger age.

I was lucky in that I was not left with any physical impairments, but I’ve read links via the Stroke Association’s Facebook page that shows others weren’t so fortunate.  I hope the kind donation made by Gladstone Brookes will aid someone on their road to recovery and helps make a difference in their life.”

The association is the UK’s leading stroke charity, which campaigns to improve stroke care, supports people to make the best recovery they can and funds ground-breaking research to change the lives of people affected by stroke.

A stroke is a brain attack which happens when the blood supply to the brain is cut off, caused by a clot or bleeding in the brain. There are around 152,000 strokes in the UK every year and it is the leading cause of severe adult disability. There are more than 1.2 million people in the UK living with the effects of stroke. 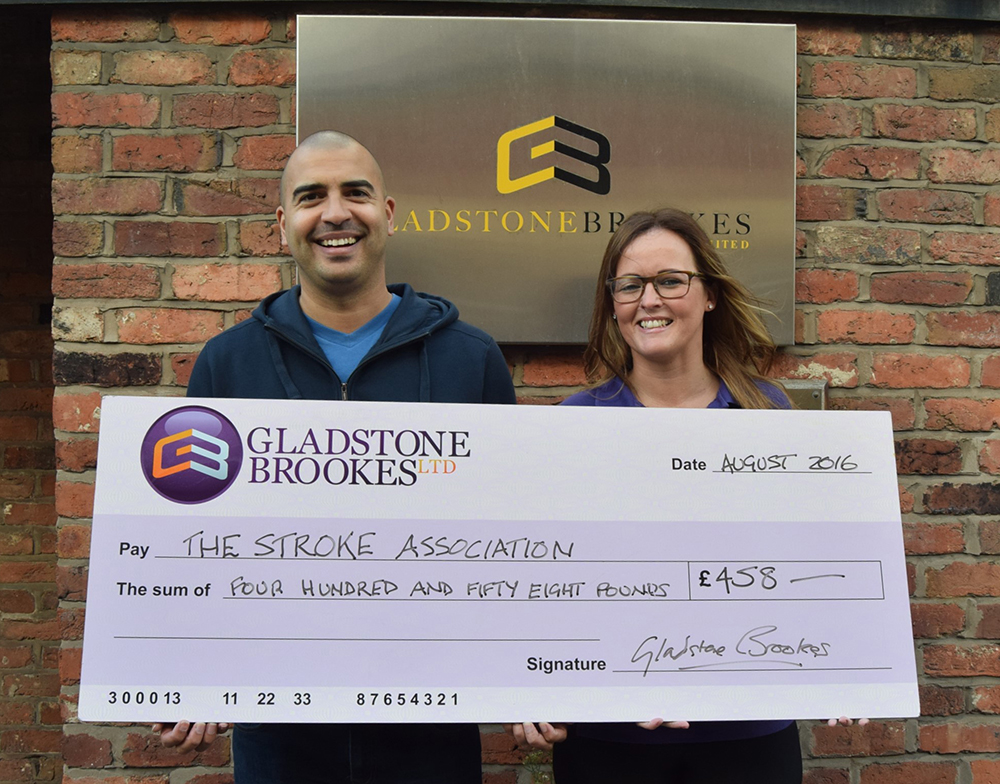 Rebecca Owen, fundraiser for The Stroke Association, received the cheque from Leon

Fundraiser Rebecca Owen said: “Without the efforts of fundraisers like the team at Gladstone Brookes, we wouldn’t be able to support the 42,000 people in the North West who are currently living with the devastating effects of strokes, as well as their families and carers.

“We’re extremely grateful to the team for all their fantastic support.”

Charities still due to benefit are the Alzheimers Society, CHICS@Alder Hey, Children In Need and the Warrington Toy Appeal rounding off the year at Christmas.

It’s not always money that we give either.

Gladstone Brookes has a very successful on-going partnership with the Warrington Wolves Charitable Foundation.  More than 100 GB staff have given a lot of their time and energy to helping the Foundation run a series of projects in local schools, and special activities for children in the summer holidays.

The highlight of 2016 was a Paralympics inspired fun day at Victoria Park, Warrington where Foundation and GB staff ran a very successful sport based fun day for 110 children from 10 local schools.