﻿ Gladstone Brookes | We believe in giving back to our community

Gladstone Brookes is a firm which strongly believes in giving back to the community in which we all work and helping those who are less fortunate than ourselves.

As well as contributing thousands of pounds to local charities by donating their monthly dress down money, the firm also sponsors the Warrington Wolves Charitable Foundation and Adrian Derbyshire’s Inspire-Believe-Succeed campaign with more than £56,000 between them.

GB has just signed up for its fifth year as a patron of the Warrington Wolves Charitable Foundation during which hundreds of staff will again take part in a wide range of activities specially designed to help children with special needs.

Last year’s sponsorship of the Foundation was close to £12,000 and saw GB staff involved in a number of special activities run by the Wolves.

Preparation for the Paralympics event involved staff pre-visiting each of nine schools to deliver three training sessions in culture, sport and art) for the children who all had special educational needs).

We also paid for the transport of two schools to attend, who could not have attended the event without our help.

The St Gregory’s initiative is now into its fourth year and staff are involved in delivering courses to the children who have special educational needs.

They have helped out in a wide range of sport-based activities plus specialist events like yoga, street dance, boxing training and trips out to Chester Zoo and the Wolves Halliwell Jones Stadium.

One of the highlights of the year was helping the children to complete a Sports Leaders course, a success which helped them gain an additional credit towards their ASDAN qualification.

We have been the principal sponsor of Adrian Derbyshire’s Inspire-Believe-Succeed campaign for the last four years, offering more than £44,000 in support during 2016.

During that time Adrian has dedicated his life to running a national anti-bullying and hate crime campaign, bringing the message to over 200,000 children and young adults across the country. 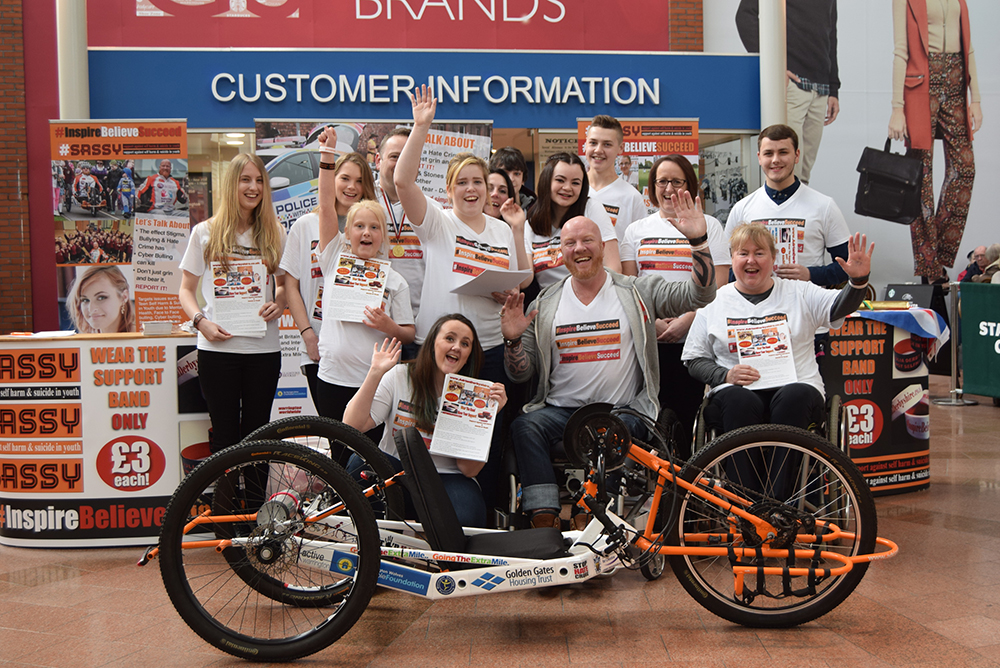 Tragically, the message of the anti-bullying campaign was brought into sharp relief for him after Julia, his 16-year-old daughter took her own life after being bullied.

Julia had been a strong supporter of her father’s work and Adrian has now created a special campaign in her honour – #SASSY, Support Against Self-harm and Suicide in Youth.

Launching the campaign he said: “I used to talk about this sort of thing happening to other people’s children, but now I talk about Julia and what happened to her.

“It’s vital that we get this message out there.  If, as a trained counsellor and an ambassador for anti-stigma, bullying and hate crime, I was unaware of what was going on, what chance have other parents got?”

Back on the road

Adrian will be back on the road in 2017, travelling thousands or miles to speak to thousands of people. In recent days he has passed on his inspiring message to students at Myerscough College, three groups of teens in Preston and Bolton. He has also travelled to Amsterdam at the invitation of city authorities to discuss taking the campaign to Holland.

He said: “I’ve been working so hard that I don’t feel the pain and loss of Julia for the most part, but sometimes it just creeps up. I was in the car the other day on the way to Preston, listening to the Ibiza Decades album, but I couldn’t stop crying at the same time.

“The #SASSY launch was very emotional, but the work has to go on. I have some great volunteers now and I’ll be talking to lots of teens in the coming months, telling them self-harm is not the answer.”