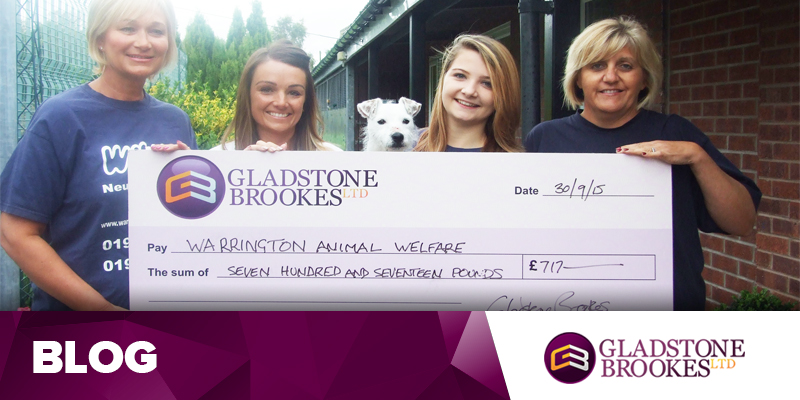 WAW was nominated by Lynsey Jenkins who went to the charity’s centre to hand over the cheque on our behalf and was shown round the facility by trustee Janet Thornton.  By the end of the tour Lynsey was so impressed with the work the charity does that she signed up on the spot to be a volunteer weekend worker.

Said Lynsey: “I love animals and can’t understand how anyone could hurt them or abandon them.  I’ve been following the charity and the work they do on Facebook for some time, which is why I nominated them. But this was the first time I had a chance to actually visit them and see their work at first hand.”

Receiving the cheque, Janet said: “I must thank you all at Gladstone Brookes for this very generous donation and we promise it will be put to good use.

The charity relies solely on fundraising and donations to keep going and £300 of the Gladstone Brookes donation will be used to refurbish one of the cat pods used to house new arrivals.

The rest of the money will be spent in a variety of ways, including helping to pay for the charity’s neutering programme which they see as a vital part of their work.

Said Janet: “Prevention is better than cure.  Over a year one un-neutered cat can produce 12 kittens. Over six years that’s a staggering 66,088 kittens as the kittens themselves breed.  For dogs the figures are one un-spayed female, her mate, their puppies and their puppies puppies would lead to around 67,000 more dogs if none of them were neutered.

“We provide a low cost neutering and micro-chipping service and offer help and assistance in re-homing unwanted pets.  Without donations like yours, none of this would be possible.”